When wood burns, it gives off volatile gases. These gases cool and condense as they travel up the chimney, forming creosote. With subsequent use, the creosote is reheated and can ignite, causing a fire up inside the chimney. In 1978 some 40,000 chimney fires in the U.S. caused $23 million in damage.Creosote build-up varies with the type of burner used, type of wood burned and how the fireplace or stove is operated. Woodburning stoves, because of their high energy efficiency, form a quicker build-up than traditional fireplaces. Softwood, such as pine or cedar, produce more creosote than hardwoods, like oak or birch. Slower burning fires result in more creosote. Build-up can be reduced by operating your fireplace at high volume for a short time at the beginning and end of use. 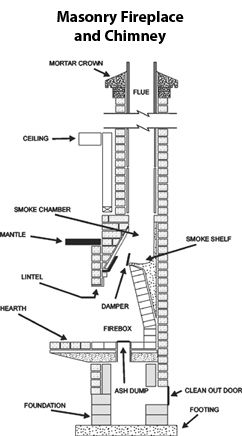 Does My Chimney Needs to be Cleaned?

Chimney flues should be inspected annually. The chimney needs cleaning if bricks appear black or "furry". Some chimney's which have not yet been cleaned often enough may have become glazed. These chimneys cannot be cleaned using a standard brush, and require expensive chemical treatment. Besides being expensive they become a dangerous risk to a chimney fire. The chimney should not be used until glazing is removed.

Why Clean Your Chimney?

According to fire officials, 98% of all chimney fires are caused by a build-up of creosote. When burning wood or artificial logs they give off volatile gases. These gases cool and condense forming creosote as they travel up your chimney.

Inserts and wood stoves from creosote build-up much faster due to their high energy efficiency. Softwoods also produce much more creosote.

With continued use, creosote can ignite causing a fire up inside the chimney. Local fire departments receive half a dozen calls monthly concerning chimney fires.

Two dangers lie in chimney fires. One is the chimney fire itself and secondly if there are cracks in the chimney wall. This could cause it to spread to the rest of the house.

Fire officials suggest an annual safety inspection. This inspection should check both build-ups of creosote and for any possible cracks or loose bricks. The chimney needs cleaning if bricks appear black or "furry".

Some chimneys which have not been cleaned often enough may have become glazed. These chimneys cannot be cleaned using a standard brush, and require expensive chemical treatment. Besides being expensive, they become a dangerous risk to a chimney fire. The chimney should not be used until glazing is removed.

THE RULES OF THUMB ARE:

• Annual cleanings for those frequently used: 4-5 times per week.

• Semi-annual cleanings for occasional use.

• Cleanings every 3-7 years for special-occasions usage. When in doubt, inspect yourself or get a professional opinion.

How Is A Chimney Cleaned?

The sweep lays down a protective covering around the hearth area. He then opens up the damper and slides a brush up and down the chimney flue until clean. Then, with a smaller brush, cleans the smoke shelf, damper, and firebox.

Our chimney sweeps will perform the following steps in cleaning your chimney:

Chimney inspections by Chimney Cricket are performed at three levels as specified by the Chimney Safety Institute of America (CSIA):

Level 2 Inspections –A Level 2 is a more in-depth inspection than a Level 1 and is required when any changes are made to the fireplace and chimney. These changes include a change in the fuel type, chimney relining, or the replacement or addition of a heating appliance of a dissimilar type, input rating or efficiency.

A Level 2 inspection is also mandatory when a home is sold or after an event occurs that is likely to have caused damage to the chimney. Building fires, chimney fires, seismic events as well as weather events are all indicators that this level of inspection is needed for your chimney.

Chimney Cricket chimney sweeps will be able to show you these precarious conditions if they exist with Chim-Scan:

Level 3 Inspections– A Level 3 inspection includes the Level 1 and 2 inspection processes as well as the removal of certain areas of the building or chimney where necessary. Removal of chimney parts is required only when a chimney sweep needs to gain access to areas that are the subject of the inspection. When severe problems are suspected, a Level 3 inspection is used to more thoroughly assess the condition of the chimney system.

A test that looks to find the source(s) of a roof or chimney leak. Chimney sweeps, with an assistant, use a standard hose to focus water on possible trouble areas while the second man observes from within the home or chimney area.

Trust your chimney and fireplace cleaning and inspection to the CSIA Certified professionals at Chimney Cricket.